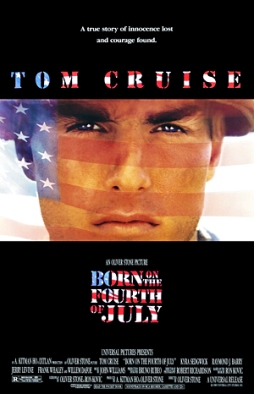 Fearful and fearless are not opposites but complements. One cannot become fearless without first acknowledging that fear exists and that fear persists within the unknown. This is true for all humans, and probably most animals, and is the reason we learn and why the calmest among us continue to learn. But the fear never goes away. Knowledge helps us internalize it and experience help us externalize it. Ron Kovic, the man, shares his experience (with Oliver Stone’s help) in Born on the Fourth of July and crafts a powerful anti-war story that Ron Kovic, the character, shows us. We are supposed to relate to him. Kovic experienced these feelings in reverse. For so many, fear is the catalyst for progress.

Born on the Fourth of July is about gradual, perplexing human disillusionment. The wide-eyed boy the audience meets in the film’s first act is brash and brave, without any real reason for doing so, except for a blind faith in Country and in Institution. Halfway through, when Kovic begins to see things through the lens of war, where Country is a construct and Institution does not play proxy for stability. Still, Kovic plays the part well. Perhaps he still believes that Vietnam was his destiny or that he was right to play his part. Toward the film’s end, Kovic devolves into a version of himself and no longer has an interest in pretending to love Country or his role in it; it happens over a few years for Kovic and just a few hours for Stone’s audience.  Perhaps Kovic was afraid to admit defeat. More likely he was afraid to admit that he was wrong.

For so many, fear is the catalyst for progress. Over time strong individuals harness their fear and push through it to attain success. The fear puzzle piece is replaced by confidence, and eventually fearlessness (the other side of this coin is cocky overconfidence, and is flimsy, as Kovic learned). To be wrong, often, and to fail, often, is to learn about how not to do something. Kovic had no fear, experienced so much failure in a small period of time, and eventually succumbed to instability, from which there was no way back, except by telling his story. It took him 20 years to return to an emotional headspace where he could begin healing, with a healthy dose of fear for the future. The backward way his adolescent mind developed stunted him for two decades. Most people do not progress, or regress, like this. Stone understood and was able to capture the moment, bolstered by a strong performance from Tom Cruise, that Kovic realized this. This is what makes Born on the Fourth of July a compelling film.

It is probably impossible for a young person to be honestly fearless. It is one thing to be wide-eyed and completely oblivious, but it takes experience – either good or bad – to learn how to calibrate a life for a healthy future. Regardless of expectation, it just is not possible to become the person that one wants to be ahead of schedule. Kovic pushed and was pulled back by fate’s tremulous hand. The rest of us got a lesson in shedding a healthy dose of fear before the clear eyes have a chance to defrost.

Born on the Fourth of July rounded out a series of five movies to end the 1980s that included My Left Foot, Field of Dreams, Dead Poets Society, and winner Driving Miss Daisy. Two of these movies have earned cult status (Field of Dreams and Dead Poets Society) and My Left Foot is known more for helping Daniel Day-Lewis earn his first Best Actor Award (of a record three). Seeing Born on the Fourth of July through a 2017 lens repositions it as more of a piece of historical fiction than as a memoir, which somewhat hurts its reputation. In that respect, it cannot compete with either Platoon, Apocalypse Now, or The Deer Hunter, and cannot be truly representative of its time or place. As the first winner of the Bush I era, and before the first incursion into the Middle East, it would make sense to have a movie reflect that peace, and Driving Miss Daisy is not it – it is hard to say what is.