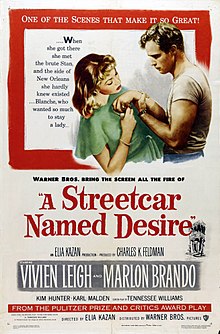 The tiniest of innocuous details, ones that pass by without notice are the crema of legends. Neither are all-time events and figures borne from a single gigantic event; nor more likely is a mythologized film shot in a single take. Every event you’ve heard about has a history in the small, snowballing events that lead up to it. Most films are lucky to have been made but for a perceived slight toward the executive production team. A single turn – not casting Marlon Brando in the lead as Stanley Kowalski – might have doomed A Streetcar Named Desire to an important, but ultimately indexed footnote to film history. As is the case, however, it is monumentally important.

What makes A Streetcar Named Desire odd, right away, is that the streetcar in question, yes named “Desire,” bears almost no weight on what this film tackles. It is a small, innocuous detail, whose point, if there is one, is to usher in the story medias res. The Kowalskis have a life of tumult, so as playwright Tennessee Williams does so featherlike, he drops in a complete mess of a personality via a perfectly normal streetcar. The detail (the name of the car), while tiny, is not extemporaneous or thoughtless. It is a clever and worthwhile misdirection. Blanche is an imbalance, waiting without delay along a fixed path toward disaster. We know this almost immediately and we wait without delay, along a fixed path, to see how this disaster unfolded. It is manifest in American, human experience and we watch this movie to chase the fixed path, deeply arcing toward disaster. Are we meant to look inward? Do we…desire it?

Tennessee Williams was a master playwright. Not only did he understand the confines of stage space and a reasonable parallel to action, he understood, somehow, the capacity of humans to deal with a rotten tomato tossed haphazardly. Sometimes it hits an actor in the face, and she has to wipe it off and keep performing; sometimes it misses completely and shatters the papier-mâché stage behind him; sometimes it doesn’t matter at all. A the cherry bomb is metaphor without being overwrought. How Williams was able to understand the intricacies of the human experience, process them, eulogize them, and repackage them as a confined statement, bold and indirect, is astonishing. This play was built for the screen, too, in an era of limited budgets and a restless postwar America.