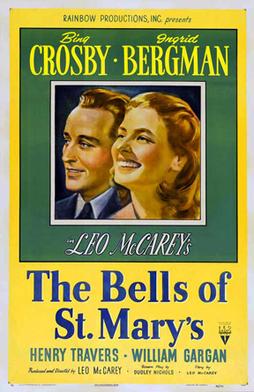 In a previous post, I mentioned that, in the mid-1940s, the sequel was not the default for film production as it is today, both as a conscious method of storytelling and because the limited data did not support it. This ethos did not extend to the concept of character clearly, as The Bells of St. Mary’s resurrects Father Chuck O’Malley from his award-winning role in Going My Way. The concept is not problematic; the Father is a warm-hearted, level-headed, American folk hero whose predilections for conversation and reason helped to permeate the average American experience. This is one thing about which the studio can be and was sure.

Yet in Oscar hopscotch, thematic shifts have required course correction. In 1945, unlike in 1944, The Bells of St. Mary’s did not win Best Picture or Best Actor. Instead, those awards scuttled over to The Lost Weekend, a noir classic, often evoking superlatives as Billy Wilder’s best work or Ray Milland’s most striking performance, perhaps. The meta-drama within the sequence from 1944 to 1945 supports this blog’s theory that the award for Best Picture (and in some spirit other Academy Awards) is awarded based on mood, politics and especially an effort to document gestalt for the year in question. That a wholesome, Christian film won in 1944 over another noir film, and the roles reversed just a year later provides clear evidence in support of the theory.  END_OF_DOCUMENT_TOKEN_TO_BE_REPLACED

In the modern era of CGI-to-reduce-cost-and-expand-purview a reader can appreciate the concept and withdraw from the premise itself; some filmmakers have become so adept at this new-ish style of blockbusting that the best way to create some kind of predictive modeling for success is to examine the allotments of a film’s budget by bucket – acting, tech, staffing, other, etc. – and plot perhaps comparable returns by genre. In this data-heavy approach many a fortune has been and will continue to be made by those who understand the underlying assumptions behind this premise. Before computer scientists called Odysseus to determine the fate of the Known Universe, a certain ebb and flow concerning how an audience viewed a film pre-digital is that the content sold the premise, and the acting usually sold the concept. There were no data to be dug.

And thus the appeal to 1944’s Best Picture winner, Going My Way. END_OF_DOCUMENT_TOKEN_TO_BE_REPLACED