Disraeli is the first film I’ve had to work somewhat circuitously to find and watch because of how old it is and how it has fallen through the proverbial crack in terms of modernization. Barring some deep web hunting, this film has never been released digitally, which meant that I would need both the VHS physical copy and the physical place to play the film. Without university support, I think that both of these would have been far more difficult than my time allows. Several key questions continue to circle the eventual completion and thesis attention of The Academy Nominees Project:

END_OF_DOCUMENT_TOKEN_TO_BE_REPLACED

The classic stories are ephemeral, repeated and revamped and often plucking away or dousing with literary detergent to esteem to the fated “other” category from which so much art flies way short. The classic drama and comedy are millennia old and as old as the human condition so it makes sense that the search for experience stems from truth and thus creates and endless feedback loop as we humans learn and regress simultaneously. Curious, but not unexpected because we know that things come in dualities. For every My Fair Lady there is in turn a Pygmalion.

Perhaps 26 years, a loosening of Hays and a different and important ethos precluded a wholly different interpretation between Pygmalion and My Fair Lady, both by author and by audience By stripping away the lacquer from the bleak if not pleasant rags-to-riches of 1938’s Pygmalion, 1964’s My Fair Lady has delighted audiences for over 50 years with charm, wit and well-to-do King’s English. It claimed Best Picture in 1964 and scores of young drama students adapt it for the stage as My Fair Lady‘s overtones are light and the story represents “different,” neatly. Rex Harrison as charming if not snooty Henry Higgins and Audrey Hepburn as unrefined but lovable nonetheless Eliza Doolittle are almost nothing like their Pygmalion counterparts, and both films are ironically better off for it. What kind of of musical ends on a non-committal frown?

For intents and purposes, these films are each an interpretation of the same idea, but they are fundamentally different stories because with the addition of cheery music and the removal of Pagan and Roman motif, My Fair Lady is more a lite interpretation of the playful wordplay and on-screen chemistry between scruffy Eliza and shiny Henry where Pygmalion is a deep rumination on socio-paraiah-ism and the stigma of self-hate between damaged Eliza (Wendy Hiller) and drained Henry (Leslie Howard). Only with removal the imagery and symbolism of Ovid’s Metamorphosian Pygmalion leitmotif and the addition of saccharine songs. Passing lines in the former become full ta-da! numbers in the latter and it feels phony even in context and the fact My Fair Lady won eight – 8 – Oscars (including Best Picture!) for a filtered take on George Bernard Shaw’s understated screenplay is absurd, but continues to reaffirm this blog’s theory that Oscars, and especially Best Picture, are given and not earned. END_OF_DOCUMENT_TOKEN_TO_BE_REPLACED 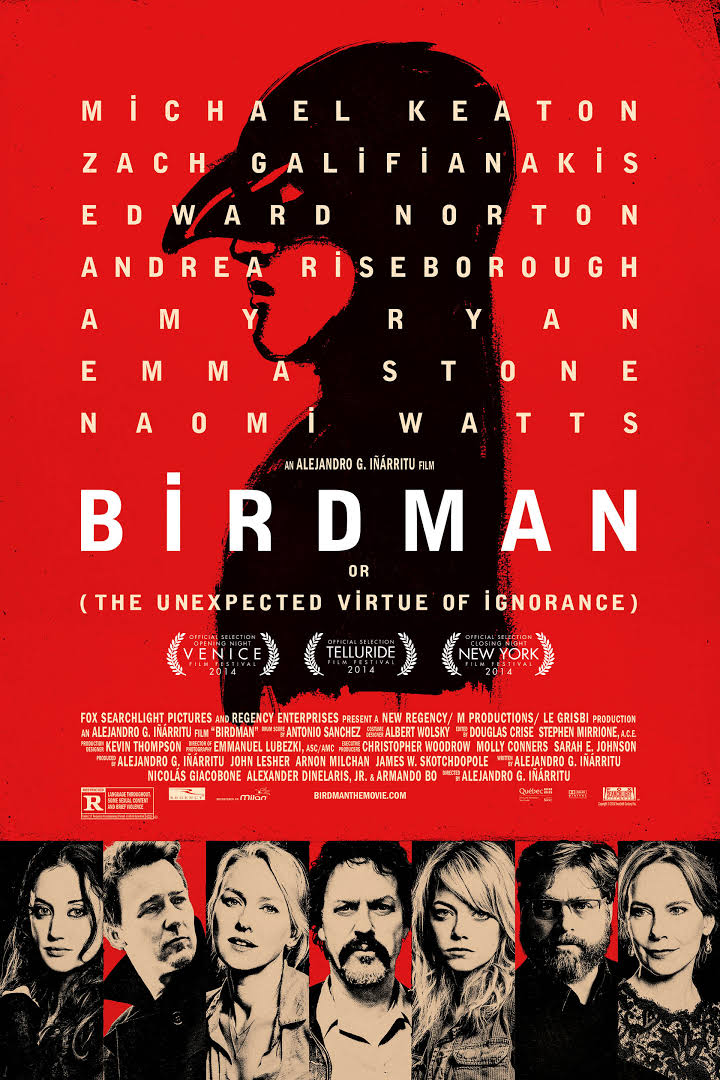 The pulse of humanity continues to thump as though nothing changes from day to month to millennium; even nihilism makes sense stretched out over an eternal timeline. Birdman: Or (The Unexpected Virtue of Ignorance) [just Birdman for the rest of this essay] is a thrice-meta dialogue between film, a film audience and everyone else. Its message is messy and unkempt and uncomfortable and its style is prolific and unimpeachable. It plays anti- to almost every convention, even the anti-convention of bakers’ dozen favorite Boyhood, which was a deeply boring and inauthentic approach to cinema verité. Its whole gimmick – and yes it was a gimmick – was that it followed the same cast around a coming-of-age, one-size-fits-all approach to growing up. Birdman, essentially and almost certainly accidentally flips it the proverbial bird, daring to ask, “is this it?” Boyhood asks us to inspect the shit, then eat it, while Birdman thumps through it, seemingly at random, slicing life, not into categories bounded by “age,” but into tiny pieces that can’t be ordered.

Birdman the film feels like a culmination of a century of film-making but Birdman the film also acts as a secret joke between friends, which adds a whole order of long-and short-form narrative. Alejandro González Iñárritu directly points at Alfonso Cuarón (director of 2013’s marvel, Gravity, and 2006’s non-nominated Children of Men) and utters something about a “single shot,” chuckles, and collects a trophy to pair with his…trophies. Birdman in turn collects a stunning number of film tropes into a mess of moments: magical realism, the myth of super, Hays impersonations, comedy of remarriage, meta-narrative, among others, and crosses between the World Trade Center with no net. It, for lack of a better word, works. The casting is kinetic: Michael Keaton is electric; Edward Norton is characteristically ugly and charismatic; Emma Stone took a break from the latest Miyazaki to eyeball the world without blinking; Naomi Watts shines like an undying fluorescent bulb. They have summed to triumph, as it wasn’t enough to just have the idea, and execute, but also to electrify.

Birdman the audience demands introspection from this film and it gets the uncanny collusion of collective narcissism and mystified mental health. Together, these conditions mirror the state of the union circa 2014. The world suffocates inside own self-importance and the stigma of “I don’t feel well” is unironically swept under the positivity rug. The everyman, he who would be King, balks at reality, as he can escape to Instagram or Facebook or to the quick-fix brigade. She who would be Queen sees the world in three-by-five, not an index card, but a glass screen, through which she can collect “likes,” “hearts” and texts. It’s not the method that is irksome, but the purpose. The dogma of this self-medicated cynicism is not the drive to be better than one’s current self, tomorrow, but to count to a million. Michael Keaton (as Riggan Thomson) arrives, not twenty years after playing Batman, to be Birdman, the magical superhero, can’t combat like-fever in his head, where his titular character splits from reality and demands more, for better or for suicide. None of these underpinning methods Linklater their way to T.R.U.T.H., but rather ruminate in the graveyard for “likes,” “hearts” and go-fuck-yourself’s. END_OF_DOCUMENT_TOKEN_TO_BE_REPLACED

Miles Davis released seven albums in 1957, including “Birth of the Cool,” which is decidedly cool. Its parts continue to reinvent themselves almost 60 years later, because the kind of cool borne from post-WWII and post-bebop jazz trickled through American culture, organically and counter-culturally. No amount of appropriation could commodify this album and no amount of projection could have predicted its or Miles’ lasting influence. Jazz happens organically, by definition, while film does not. It is redundant to label “Birth of the Cool” as a compilation, because, as countless reissues of jazz why demonstrate, the “take” chosen for mastering was and is one of many. Film, while confined to the bounds of its medium, does not have this luxury, so it is slightly disingenuous to compare Miles Davis to Peyton Place, surely a combination of best takes and very plotted points.

The calculated style is not bad in any way, and in fact the karmic dissonance between Jazz and Film in the late 1950s allows the audience to take the lid off the fabric of the culture. Each year that passes now represents in historical decay (up until the mid-1990s or a little later) as the timestamp of culture represents the only thing we know about moral goodness or artistic prowess. Peyton Place is a near three-hour culture marble that dings around the moral spectrum, hoping to land somewhere near the moving-center target; its characters are direct representations of lust and envy, of purity and defiance, and its plot is one of resolution. And if ever a hanging diminished seventh existed, then Miles would have called it on purpose. If Peyton Place was a jazz musician, it certainly would not have.  END_OF_DOCUMENT_TOKEN_TO_BE_REPLACED

This powerhouse film dramatizes relationship-building to cathartic effect. Over the course of seemingly less than a week, we exhibit the full cycle of most of The Philadelphia Story‘s main characters’ synapses realigning as they come to realize their past mistakes, present unhappiness and future malaise simultaneously and work effortlessly to redefine themselves as modern people in the modernist sense: that self-consciousness is the righteous path and function, in their case, life, follows form. The Philadelphia Story huffs through almost two hours and the audience is better for it, almost, in the most modern way: that there exists a strived-for completeness, when in fact the audience must know that this is the question. In a way, whether intentional or not, through a modern lens The Philadelphia Story defines modernism through postmodern means.

Because through hyperrelapse behavior and infinite loops of information, the modern (in a contemporary sense) man and woman knows that the ultimate goal is to strive for completeness with the full intention of achieving a sliver of happiness completes his or her journey. Ever the pessimist, he or she is honest, which is the key component to the argument against The Philadelphia Story. At its core the film is art and the sped-up premise is meant as a plot device, eschewing reality for core competency; after two hours, the audience must leave with an impression – good or bad – that the film did not flounder. It is reasonable that the film is somewhat dishonest because I think that the writing and acting is compelling enough, and through seasoned performances from Cary Grant (C.K. Dexter Haven), Katherine Hepburn (Tracy Lord) and Jimmy Stewart (Mike Connor), it is slightly obvious that the production team was in on this joke. END_OF_DOCUMENT_TOKEN_TO_BE_REPLACED 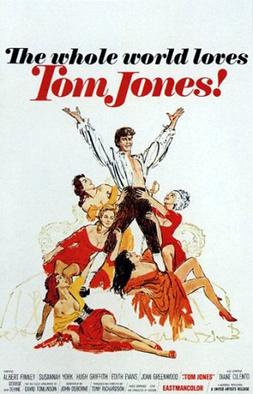 I wrote about contemporary relationships with film in my review of The Big Chill and would be remiss to repeat myself but I feel Tom Jones, 1963’s Best Picture winner, requires a requisite analysis because I honestly can’t understand how this movie is funny or why it won Best Picture. The win is likened to a comedy club’s performances being booked by a promoter with no sense of humor.

With Tom Jones, there’s mythos and adaptation that stretches the meaning of “action” and “comedy.” Outside a carefree plot and handful of innovative storytelling gags ripe for parody, the two-hour-plus run-time is devoted to characters I can’t care about, a hackneyed plot based on the assumption that I care about our eponymous character’s whereabouts post-credits and humor that seems almost purposefully meant to be dated. Actually, since this film is set in 18th century England and uses mechanical 20th century humor, the story, based off an actual 18th century novel relies on the director/actor pushing anachronism as always funny all the time. I am open to believing that my 21st century brain is simply tired of this benign technique, but more likely than not, the film is simply not funny.

Tom Jones might be built solely on anti-humor, too; purposefully being unfunny in an attempt to cajole the audience inside the joke. The character Tom Jones is certainly based on true characterization from the early- to mid-18th century prim-and-proper Britain, when, as most media had portrayed (and continues to, albeit somewhat self-referential, today) the stoicism as a desirable trait. By establishing this idea as the foil, early, and reinforcing it often, Tom Jones becomes funny because it is not funny – or so the idea would be. Unfortunately, it’s just a head-scratcher. That said, I am equally certain that in a more favorable set of circumstances, this movie is both funny and poignant.  END_OF_DOCUMENT_TOKEN_TO_BE_REPLACED