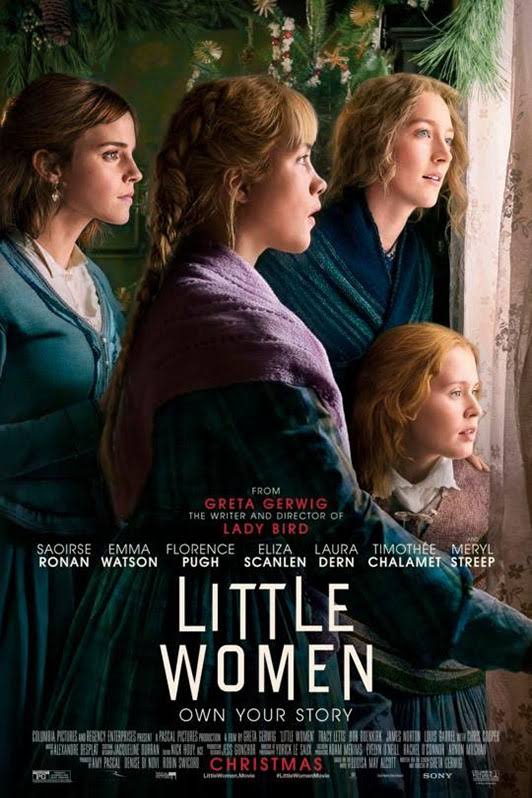 Besides the fact that diversity is Good, everyone deserves a shot regardless of race or skin color or gender or orientation. Whoever you are, you deserve more attention for making really good art. What I think is even better is that a lot of the stories that we haven’t heard yet are probably going to be coming from women and people of color and people of different sexual orientations and preferences. And these are the stories that are going to define this generation of audiences and I think that producers and people that fund these projects and that greenlight scripts should do a better job and lead the way, rather than just following the dollars. It’s going to be slow rolling anyway.

Yeah. Throughout the past century almost all of the film adaptations of Little Women have been huge box office successes, and proved that movies that center around women’s stories can perform really well at the box office, and that both men and women will go see these movies. And you can go all the way back to the very first adaptation of Little Women, that 1918 version, which I haven’t seen because it’s lost, and see that this is true.

When I was researching the Vulture piece, I was going through this old Paramount pressbook from 1918, which has all these promotional materials for movies that Paramount was releasing at the time, and there’s all this material urging theater owners to show this Little Women adaptation at their movie theater. And it says: “

It is safe to state that nine out of every ten women and girls in your town have read this idyllic story of home life during the period of the Civil War … Every woman who has read this notable book in her girlhood will see the picture again at your theatre. Every mother will want her daughter to see it.”

I’m going to venture a guess here: the Hays Code may have slowed this down.

I think a lot slowed down the acceptance and adaptation of female stories and stories about people who aren’t just straight white people. I think that the folks who were in charge of censorship for 25 or 30 years were not just we’re not just editing for explicit material or whatever their moral code was. I think they were probably editing out stories… a person who color or a gay person or someone experiencing sexual trauma was not allowed to be told. And before filmmakers could even decide whether a story was worth telling, they were hamstrung by the code and they found they were going to eventually get censored by it. It halted a lot of progress.

So I would bet that the Hays Code definitely played a big part jamming natural progress and I think also film executives are probably very skittish. And the folks who have a lot of money and prestige and power tend to trust their own instincts, even if they’re rooted in a very narrow set of experiences.

And when it’s all white men whose instincts are “I am white man, I understand white men, so we’ll pay white men to make movies about white men until it makes me comfortable.” It’s an a-virtuous cycle.

A lot of these big studios are reeling (ha) from the legacy of the Hays Code, and a lot of the staff, children of filmmakers, maybe children of people who saw these films still linger. We’re going to need another generation or two: this upcoming generation will be the “change” generation and the next generation of filmmakers. The next one will show that the film industry won’t even be recognizable in 40 years.

First of all: Saoirse Ronan, I think, is absolutely fantastic. She gave a deeply felt, lived-in performance as Jo. She’s a fantastic actress. And I think you can absolutely draw a parallel between Saoirse Ronan in the 2010s and Winona Ryder in the early ‘90s. Both actresses in their early 20s who are so good at playing coming-of-age roles, playing troubled, intelligent, tormented, teenage girls in various settings. I thought Saoirse Ronan was also brilliant in Lady Bird and in Brooklyn as well, which are both kind of period pieces in their own way.

Another thing I liked about the 2019 Little Women was the cinematography, and the level of visual detail in every scene. It’s stunning, and I particularly loved the scenes where the whole family’s together, when the girls are younger, and the whole family is together in the living room, and there’s such a family feeling to those scenes. Greta Gerwig directed it in such a way where they’re all talking over each other. The sound design is very chaotic in a very realistic, familial way. All the girls are talking over each other and there’s so much affection and love and bickering and it just feels like a real family. I thought that it was just extremely well directed. I really like the scenes where they’re all together.

Yeah, Saoirse Ronan’s performance was my number one thing that I liked the best about this movie as well. I’d also like the scene where Bob Odenkirk showed up halfway through for a little unintentional comic relief. He’s so recognizable from Breaking Bad and Better Call Saul! that seeing him in this context was a little…goofy. He was good though!

This was going to be one of my main points. I thought Timothée Chalamet was wildly miscast in this role. I understand the twee nature of Greta Gerwig’s work and the fact that Timothée Chalamet is the it boy in Hollywood right now—he’s the hot young thing. Every movie he’s in gets a bump.

My view of who Laurie is, is Christian Bale’s performance. Obviously this is Greta Gerwig’s telling of the story so she had a different interpretation of what “big strong man” means to her in 2019 whereas the 1994 version and even the 1933 version had much different takes on it.

To me, the Laurie character is meant to be this very stereotypical six-foot-three, two-ten, and handsome, but a little bit oafish; all over the place, but well-meaning; a duality of traditional masculinity and what a “man” actually is—a flawed human. And I thought Christian Bale did a great job—he is my standard bearer for that type of role anyway. And I just think that it weakens the relationship when you have two skittish, waifish people going at it.

There’s a power dynamic, which I think Greta Gerwig was trying to flatten a little bit, which I think needs to exist in order for the story to make sense as it was written, but again, this is Greta Gerwig’s interpretation of it. And so for me and my expectations for the film, I think he was miscast. For Greta Gerwig’s interpretation, I think he was the perfect cast. It’s hard to only comment on what movie we got and what movie we want, though.

I thought he was good, but he got too much screen time relative to the character, Professor Bhaer, who I think is an important character who was not very well developed in this particular adaptation of the film.

In this theory of Greta Gerwig’s Little Women, (if I’m going to interpret this, and I’m likely to be way off, and I don’t want to put words or ideas in her head) the whole flattening of the power dynamic, is that she didn’t want Jo to succumb to the eventual “needing a man to be fulfilled” trope.  And so by giving Professor Bhaer less screen time and making him an increasingly secondary, throwaway plot point. Greta Gerwig doesn’t seek to remove the power that Jo had over her own life, in a way that the ‘94 version did, which was a little more faithful to the book, and maybe faithful to Alcott’s experiences.

I just think it was a conscious choice to make this man a secondary part of Jo’s life rather than her eventual understanding that you can do both: you can have a career and a life and also find love, and it’s likely to come out of nowhere. That’s what that’s what that character represents to me. Dumping this part of the plot into “Oh, I guess you’ll get married now, but whatever, he’s just a man,” was a weak choice. And I think played out the opposite way of what Greta Gerwig was expecting. Instead of empowering Jo to make her own decisions it infantilized her.