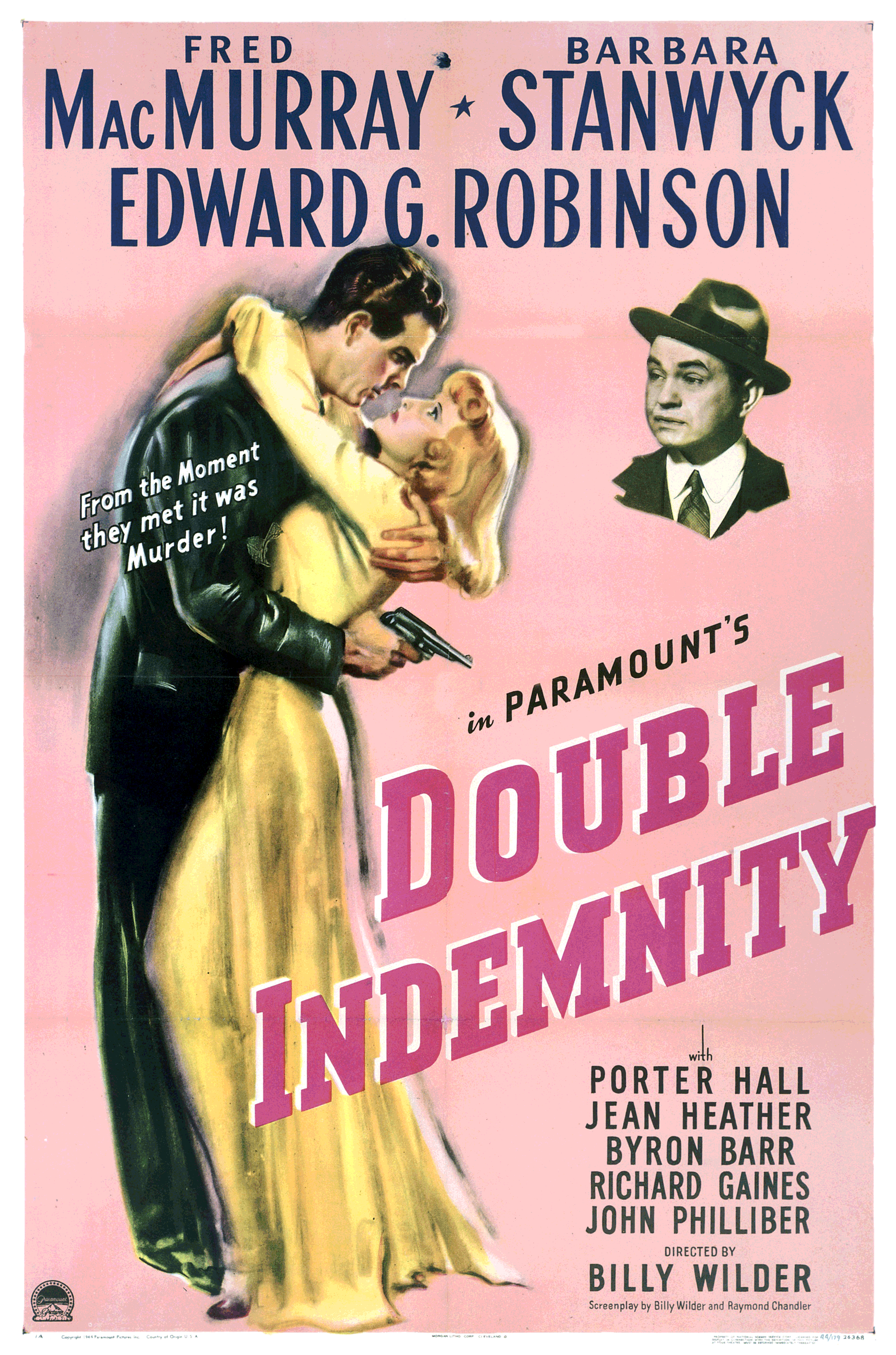 Here is a short rundown of film noir:

…[b]ut the vivid co-mingling of lost innocence, doomed romanticism, hard-edged cynicism, desperate desire, and shadowy sexuality that was unleashed in those immediate post-war years proved hugely influential, both among industry peers in the original era, and to future generation of storytellers, both literary and cinematic.

This site continues to cite Double Indemnity as patient zero for the revolution of “black film” and it definitely doesn’t matter. That Double Indemnity sought but a visual vehicle for James M. Cain’s novella of the same name (this movie is probably on the list of movies that tremendously surpass their book equivalents i.e. The Godfather) is not significant. This “movement,” depicting seediness with sexuality and anger without avarice, wasn’t a Hollywood plant. The closest film noir came, and can be backed up by contemporary evidence is as a natural counter to the propaganda optimism bought and funneled through a government machine. For every Going My Way there was room for another Big Sleep.

Eventually noir contracted in the United States as audiences rejected the bleak for the bulbous (see: Marty, a rightful anti-noir, which won in 1955). Europe’s studios, surely replete with their own hot-take Humanism, sought to redefine art as it predicts reality, and branded their films “new wave” and “realism,” but really were noir reincarnate, but with better sound editing and sometimes, C O L O U R. Every few decades noir pops up as a counter-culture movement. Smart filmmakers understand that for every The Blind Side warm-heart there is room for a Winter’s Bone non-casual grit and grimace. Recently counter-epochal film has sprung up as “neo-noir,” whose best take, LA Confidential is as embedded in its own phone booth legacy as Double Indemnity is in its paper trail. Postmodern noir will comment on the fight against Twitter and Facebook. 2018’s Searching tried this concept, smartly showing setting its audience inside a computer. The film itself was a called strike three. Last comment on film noir: brand it however, what the “genre” is is much more anti-modernism than it is pro-anything.

Innocence, romanticism, cynicism, desperation, and sexuality are human qualities often assigned to a certain human group. Children are “innocent,” say; men are “cynical;” women are “romantic.” A man’s sexuality is to be cherished and promoted, while a woman’s, still, wrongly and …cynically, is to be shamed and bottled. Noir not so much as flipped these ideals, but disassociated them. Double Indemnity made Fred MacMurray’s Walter Neff desperate and romantic. Barbara Stanwyck’s Phyllis Dietrichson is cynical and sexual – her first scene is outrageous for 1944 because she enters stage right in naught but a towel. Her voice is sultry and by film’s end the audience learns, in a sublime fell swoop that she is nothing but devious. The “child” she portrayed herself as, part unaware and part unassuming, is perfect for the emotionally impotent Neff. Double Indemnity‘s “twist” is not shocking or incendiary but a slow, lethargic burn. Upon an immediate rewatch, direction from Billy Wilder seems immediately obvious. Mrs. Dietrichson is a rube looking for a set-up she cannot have; she is depicted as childlike. Neff on the other hand is also played for a rube – by himself, from the walkback narration. We are meant to believe that Neff, insurance-man-with-a-pointed-collar was swallowed up by his own desire for any excitement, but was in fact spat out by a series of normal, if not nefarious, acts. The denouement comes all-of-a-sudden – Wilder’s frenetic third act is capped by quick shots, bleeding out, and fin. How like a noir ending, no?

A deep rewind into Oscar history puts Double Indemnity on a long list of movies nominated for several but winning none, including Best Picture, Best Director, Best Screenplay (adapted), and Best Actress for Barbara Stanwyck. Going My Way, epitome of feel-good cheese won this year and its “sequel,” The Bells of St. Mary’s almost followed it up in 1945. This is where popular film culture was at the time, and probably still is. The year, 1944, was somewhat uneven in terms of Oscar quality: Double Indemnity, Wilson, and especially Gaslight were tremendous, but winner Going My Way and the other WWII propaganda piece, Since You Went Away, were where Hollywood was (and still is). Uncertainty still clouded the Allies chances for victory in Europe and Asia, and so popular culture doggedly tried to keep hope from drowning in the despair of the truest human emotion, despair.