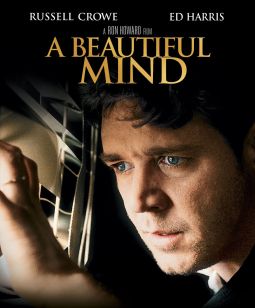 It is impossible to tell in two hours the mess of a man who simultaneously gave language to a fundamental human condition and who also couldn’t, at times, distinguish between real and not real. Thankfully, for the applied economics work that he described so succinctly and eloquently, he did not kill anyone in its stead. Because John Nash held both of these extremes inside of his brain simultaneously, if not incongruously, his story is intrinsically interesting because of the questions it generates: how did he keep himself together enough to give us his famous theory? What challenges did he face and how did he overcome them? Which characters influenced him and how did they evolve to meet him where he was? What don’t we see? Instead of a round look at the person who was, A Beautiful Mind chooses to highlight Nash’s best self, tempering it with periods of prolonged strife. The narrative is clean if not flawed.

In her biography, Sylvia Nasar does not shy away from John Nash the man; in his adaptation, Ron Howard does, and creates John Nash the character, the John Nash that now, outside mathematics and economics enthusiasts, a plurality of audience members know. This is not a problem. As an audience, each person has to decide what to believe, which is the basis of myth. But: a movie like A Beautiful Mind does help us attempt to answer the question of what is more worthwhile from a biography like this, pure truth, as we might expect from the Oscar, or pure entertainment, which we might expect from E!

The distinction between the two is not necessarily evenly distributed. Picture this: there is not a straight line between pure documentary and pure entertainment and the best films hit some sort of apex of some sort of normal distribution. Or, at least, they are supposed to. Empirically, if this is the case, there should be some objective, measurable data to determine “BEST.” Didactically, there is no data besides financial returns and those tend to correspond to popularity, not necessarily quality, and there is no way to marry the two without editorializing the results. So: how should we, as individual readers, and, potentially as a voting bloc, judge the man John Nash as we (or they) evaluate the myth John Nash? Let’s look at a few examples.

Mythos around his alleged homosexuality and abuse. This point is probably the most salient case either way for criticism. The questions that an audience would want to ask is how much truth can we know, how much narrative bandwidth should be devoted to either displaying a truth or version of, and what stance should the narrative take on either issue, if at all? These questions alone would be enough to fill a documentary-length film, but they are neither narratively compelling nor is there funding or demand for a John Nash hit-job; there was no counter-narrative to correct or controversy to un-manufacture. Whether John Nash had intimate relationships with men or not, or somewhere in between, serves no narrative support in recounting this man’s inimitable contributions to pure mathematics and economics or his struggles with mental illness. Any way Nasar or Howard could have sliced this conjecture would have been a bizarre induction of Nash’s character, and ultimately would have made for bad narrative and no Best Picture.

It is too simple to dust aside the alleged allegations of Nash’s abuse, and it is unethical to attempt to overdiagnose Nash with a disease he may or may not have and how his brain condition affected his cognitive function. In other words, should we assume that his delusions, as stylized in the film Sixth Sense-style, are a cause of his alleged neglect and abuse of his family, and not an effect of something else entirely? This question is fodder for a doctoral thesis, not a film designed to entertain first. By spending more narrative bandwidth on Nash’s alleged abuse, what outcome would Howard expect? Would the director want to create a more or less sympathetic atmosphere for Nash’s genius. The question is did Nash contribute Nobel-level work because of his demons or in spite of them? The tone A Beautiful Mind strikes is medium; the tone also is built from word choice, lighting, editing, and performances from Russell Crowe’s co-stars: Alan Tudyk, Ed Harris, and Jennifer Connelly, who all serve in some capacity to control the mood around a Nash action. In this way, the abuse angle is controlled, somewhat hidden, and served the narrative, the mythos, first. If we could know more, and get closer to the “truth” the effect on the stylization would be marginal at best.

Contributions to modern economic theory. If nothing else, his “Nash Equilibrium” is an elegant, provable theory that marries rational behavior with gross decision-making. Somehow, A Beautiful Mind understates how important this theory is and will be in describing human behavior. In this case, the man, in his 27-page dissertation, in which he cites himself, John von Neumann, and Oskar Morgenstern in two separate citations, and that’s all. The rest of the work is entirely original thought. In academic circles, the brashness of this claim would be taken not seriously at first then very, if not singularly, seriously later. If the narrative wanted to veer to awesome, its writers could have crafted a micro-arc about this point. It would have expanded the capacity to deify him on film. That the screenplay sort of does this, but more squarely focuses on the day-to-day of a paranoid schizophrenic is a misallocation of resources, and ultimately opens the film up to criticism. This is …a reasonable way to make a popular, if not controversial film.

McCarthyism and self-sabotage. The underlying mistrust among anti-fascist liberals and pro-peace conservatives drove Senator Joseph McCarthy to systemically attempt to purge the country of anyone harboring communist beliefs. Communism, in the iteration employed by this strange coalition, was a threat to democracy (it wasn’t) and to the global neoliberal order (it did, but neoliberalism is a half-lie). Instead, McCarthyism enhanced very impeachable paranoid delusions, whether real or fake, in order to control a population that rejected fascism and war. McCarthy was not outwardly for anything so anyone who could not prove a negative (they were not a Communist) was subject to psychological torture, public humiliation, and irreversible libel and slander. This national, ugly mood may have contributed to Nash and others building up a counternarrative; it so happened that John Nash had actual paranoid delusions. The timing of this is impeccable and part of the larger what-if narrative that A Beautiful Mind had standing to ask, if it were another movie. Did Nash induce his own chicanery or was it pre-ordained via the national atmosphere? I will hear arguments for either side; the film will too.

Russell Crowe had just had a monumental year, winning Best Actor for Best Picture winning Gladiator in 2000, and put forth a deeply intriguing performance as John Forbes Nash, Jr. in A Beautiful Mind. This blog takes the Best Picture nominees for granted, even if it doesn’t explicitly explore the premise, “what if the nominees were different?” which opens up the debate much wider. Academy Nominees Project assumes that the nominees, collectively, took some sort of snapshot of the year in film. Inevitably, it will be incorrect a good portion of the time; 2001 was one such year. Nominees The Lord of the Rings: The Fellowship of the Ring, Moulin Rouge!, Gosford Park, and In The Bedroom are painfully thin, if not representative. (Thinking about it, 2001 is good, if not less functional evidence for expanding the number of nominees past five). Also release that year: In The Mood for Love, The Royal Tenenbaums, Mulholland Drive, and Memento. Contextually, A Beautiful Mind still would have won based on the film’s prestige and superseriousness, but, despite the man mythologized we could make an argument for some of the non-nominees. In another world devoid of the mythos célèbre, John Nash would have been celebrated on-screen, perhaps without much fanfare.