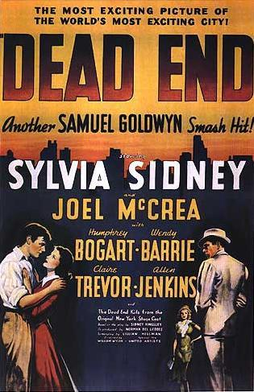 Dead End, a 1937 slice-of-life, riches-and-urchins film is a masterful adaptation of stage-to-screen because the theme works with light hands. In an attempt to backdrop ostentatious wealth against abject poverty, Dead End neither attempts to comment on income inequality nor class politics. Instead, the film, basically confined to a single stage (with a few side rooms, as physical asides) tells the story of a couple of chipped kids with no discernible past and, as the story would lead a reader to believe, no future either. Yet we, presumably not destitute, can connect with these kids because for every “stage” in our own lives, there exists at least one kid who has been beaten down by his milieu. Dead End works in that mysterious middle ground of unintentional brilliance, of unassuming aloofness.

The viewing object – the screen – held enormous weight in early Hollywood; no home video existed and the audience needed to see perspective projected onto it. That said, a screen by itself is not perspectival, so in order to create depth, a cinematographer will use different lens widths and size through distance. This technique is not new and not unique to film. Some artists intentionally bastardize perspective to trick the mind, others unintentionally misuse equipment and shift perspective from the normal human eye’s perspective and either ruin a scene or create some modernist brilliance – cohesive and contentious. Dead End exists somewhere in the middle of intentional because of its adaptation from a play written for the stage and unintentional because the available film equipment in the 1930s limited a director/cinematographer’s options.

Now, this combination is not exclusive to Dead End, but alongside its unassuming story it feels more real – even if we know we are watching a movie with some hokey dialogue. Part contemporary, part constrained (Hays Code), thematically, Dead End is a gut punch that falls short of perjury, a fact only emboldened because its screenwriter did eventually see the Blacklist during Communist crackdowns later on in the twentieth century. Therein, then, loomed a sense of disobedience, heavily restrained under the guise of the ugliness of class divide, when we might argue that the insubordination came in spite of the film: who would see a few crabby bad-egg kids as the light, not the dark? No one. We see class through cut glass, not as the premier divisive storytelling pastiche, but as a driver for the humanist elements belonging to each character – for wealth or not, each character faced the same demons through different circumstances.

Notwithstanding, Dead End spawned a running gaggle of films starring the titular “kids,” who, through a series of seven films and 21 years of rehashing, sought to continue the reflection of the original film’s somewhat (intentionally?) bland plot. In total, the “team,” or pieces of it, made 89 films gradually transitioning from the gritty urchins to teens on hi-jinx, softly easing up as the Hays Code faded from history. The screen became longitudinal, the films’ depth became institutionalized and the heated disobedience became harmless. Ah, time.

We can write about Humphrey Bogart far down in this analysis because his role was mostly plot fodder, a driver for denouement rather than the central force he became later in Casablanca or in The Treasure of the Sierra Madre. We can analyze whether his role as “Baby Face” Martin helped to catapult him to stardom. After seeing this movie, probably not, and he probably deserved the low billing for two reasons: first, the part did not offer leading credentials and was unmemorable save his literal “smoking gun” and second, his role played an undemanding second chair to the all-star, if unintentional, Boys. In fairness, too, we also do not invest enough into his top billed screen mates, Silvia Sidney (Drina) and Joel McCrea (Dave), whose “relationship” seemed a random attempt to cause the Boys to do something dastardly. In their time (1937), each had had roles in dozens of films, but each went on only to be halfheartedly remembered (Sidney’s Oscar nomination for Best Supporting Actress thirty-six years later).

William Wyler (Mrs. Miniver, The Best Years of Our Lives, Ben-Hur, Funny Girl [wow, three wins! – Ed.]) lent his deft hand to this film, but even though brilliant, Dead End did not capture the essence of unease the way The Life of Emile Zola did. Instead of some mean kids, the Academy might have seen it, gestalt meant true Civil Disobedience in the face of injustice.