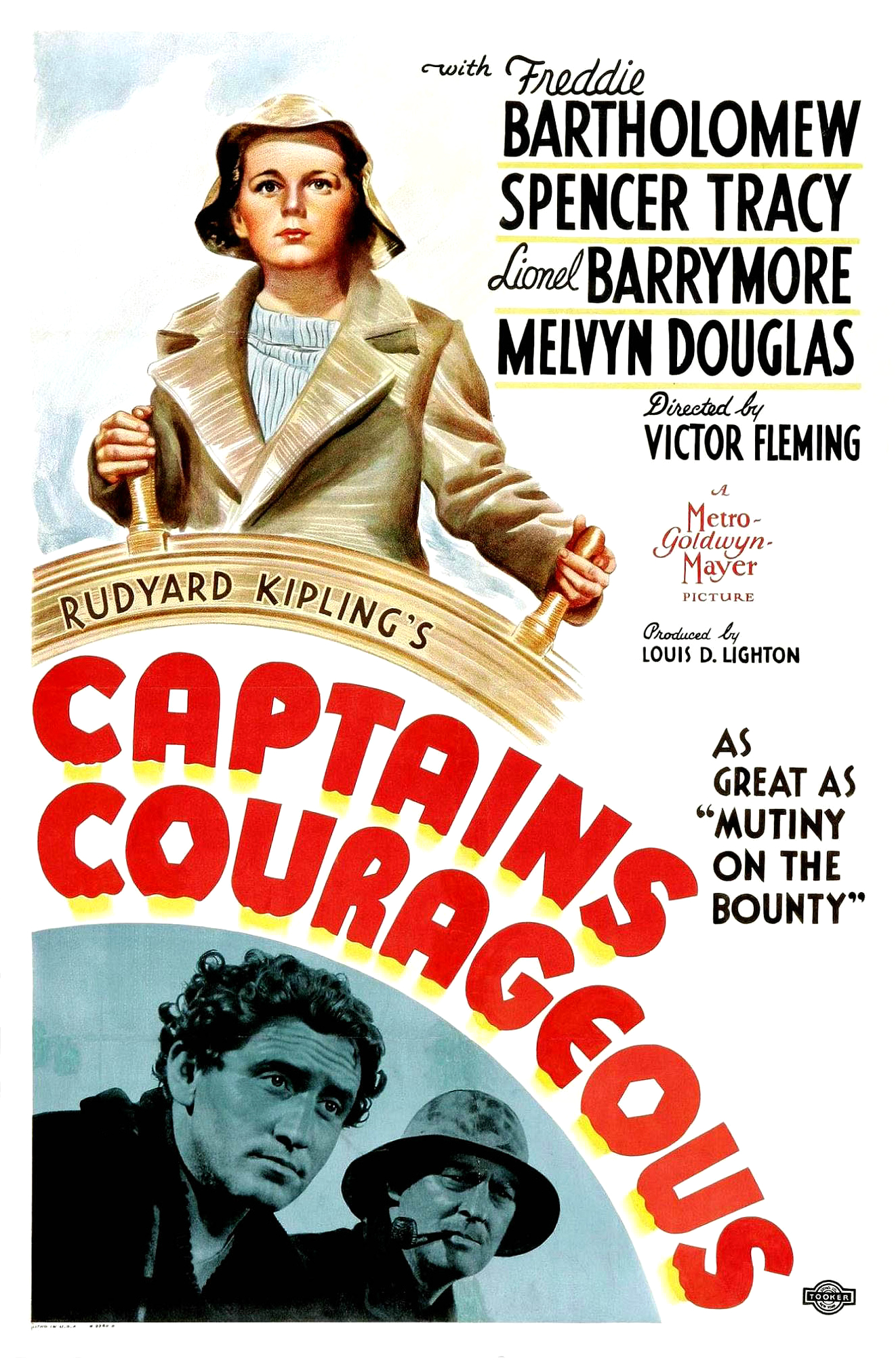 Captains Courageous is well-paced, well-acted and holds up over the 80 or so years since its premier in 1937. Rudyard Kipling, of Jungle Book fame, wrote a story that translates well to the screen; humans have a fascination with the unruly sea, that which can giveth life but also taketh. The ocean is often the setting for panacea, spreading hope like miasma, even to the darkest corners and especially for the darkest souls. Kipling’s story extends its reach to that of a child, young Harvey Cheyne, for whom wealth has clouded an imagination and turned a typically joyful time in a person’s life spoiled, spiteful and shrewd. As a character study, Captains Courageous provides a wealth of archetypes that interact: young Cheyne and his wealthy but distant father, Spencer Tracy’s slightly-overacted-but-nevertheless-earnest Manuel, seaworthy Captain Disko Troop (Lionel Barrymore), et cetera. But the movie still feels told-before in a way, and as a consequence, dull.

Perhaps through jaded-colored glasses, this story has been told many times since and can no longer be differentiated from the countless iterations in the 80 or so years since. This is, of course, quite a subjective response dependent on the fact that The Academy Nominees Project exists with a close circle of friends almost guaranteeing we’ve seen everything (not literally). So while this pieces change, the story remains and those versed in storytelling notice a rehashing of tropes as a “teaching” moment, a resolution somewhat guaranteed, that’s incomparable to real life situations. It’s escapism at it’s finest because Captains Courageous is well-made and well-meaning. But escapism is unsustainable. Its counterfactual is weariness, to be surfeit with time and life experience.

With that in mind Captains Courageous is more a kids’ movie, aimed at the percentage of the population not yet able to tell the difference between a visual parlor trick and a son-of-a-bitch real life tragedy. Hiding this fact behind the man versus sea motif helps push the metaphor itself forward; it does not define or reform character and it is not essential to the plot. For kids, though, the visual element is more important than any of the analysis that adulthood forces onto a reader. Adults have choices. Their brains have compartmentalized thirty-plus years of knowledge (give or take, a little or a lot) and in order to make sense of a new stimulus, the mind works wonders in comparative reasoning, object permanence and idea abstraction. Everything adults experience can be related to anything else, save for those rare “Eureka” moments, where a new discovery is made. Adults live for these moments, and work toward uncovering some sort of new truth unrelated to anything else. Storytelling is different because there are no new stories – except to children.

To a child, a young one like Harvey Cheyne, the experience of the sea, and men from distant lands and hard work are new concepts and a child’s brain takes time to solidify the baselines of comparison. So while Captains Courageous is dull to the adult mind, to a child, it is a new series of ideas, ready to be explored.

As an aside, the most interesting part of this film is its title: Captains Courageous is not meant to be possessive. It is ripped from an old English ballad about a 16th century English heroine:

When captains courageous, whom death could not daunt,
Did march to the siege of the city of Gaunt,
They mustered their soldiers by two and by three,
And the foremost in battle was Mary Ambree.

If each character – young Harvey, weathered Manuel, earnest Troop – is himself a captain and his or her story is one courageous, we might be able to buff a little of the dull and see, as adults, the shiny lining within all our stories.

As number three of ten nominated in 1937, Captains Courageous is the most underwhelming so far. The Life of Emile Zola is a classic, and The Awful Truth is a fun (though also perhaps a little overdone) romantic comedy but Captains Courageous just isn’t memorable. A nomination, sure, to pay homage to Kipling’s contributions to the arts, but a win? Certainly not.