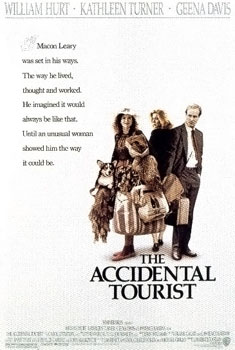 This post will be in two parts within this block of text. I’ve decided to undergo a thought exercise: what can I parse about this movie based on the title? How right/wrong will I be after I watch it? What does it mean if I can or cannot guess at certain plot points before the fact? Does predictability mean anything?

The Accidental Tourist will play as a deterministic expose on what it means for a man to portend a comfortable existence in a stable environment. He will be a man of some importance, either to his place or to his cast of characters and an event – something – will call to attention what it means to stand for something of importance, taking into account the particular nature of this man’s relationship to his place, as I assume “tourist” means someone who is unfamiliar with a particular physical location. He will be “accidental” because this movie will demonstrate, through somewhat obvious technique, that our main character, the Tourist, will in fact be quite familiar with his place or places. The title will become more meaningful as a metaphor and the inexact science of balancing relationships with people and place will help shape the outcome of a man’s fate as he grows emotionally. The unfamiliar situation that constitutes “accidental” will, further, in his life become a representation of wantonness and loose-living that helps him form even stronger bonds.

I assume a love interest will play a huge role.

I watched The Accidental Tourist and I am somewhat satisfied with my preview. The protagonist and anti-hero of sorts, Macon Leary (William Hurt), is a man of some importance, but not necessarily outside a tiny niche of business travelers. For the road-weary business traveler, like a fish out of water – the accidental tourist – Macon writes travel guides for the insulating experience. He is the perfect person for this job, just boring enough to travel to Paris to sample its Burger King, and meticulous to the point where he draws attention to the different ratios of toppings on the Whopper. He leads a dull life, inexplicably married to an insecure and suffocating woman. Trauma and exhilaration affect him the same way. To Macon Leary, the only accident is a deviation off the shortest path from point A to point B, cradle to grave.

The title is a meaningful representation, as metaphor, of balance between relationships with people and oneself. The man has lived through unspeakable horror, though it is continuously hard to say definitively that he is any better or worse for it. The terror tears his relationships in tatters but opens him up to new and unfamiliar – accidental – relationships. He becomes a tourist in his own life, which is an interesting method by which we can hope to understand the man as different from his mind and vice versa. Even to a man like Macon, who sees the world through a binary lens, the distinction between nature and nurture and self and other is messy, and no matter how hard we attempt to understand the motivations of a man, we’re always left wondering how much we know and how much we can ever know. The metaphor is folded, actually, so that even though we follow Macon from day-to-day, we can only ever know about him through his relationships. He’s an accidental tourist in his own life.

Macon’s love interest is somewhat unnuanced, and is an obvious foil to Macon’s incredulous lack of self-awareness. Muriel Pritchett (Geena Davis), divorced with a sickly child, sees everything opposite to Macon; darkness, light, love, death, boredom, opportunity and so forth. It’s a stale trope, used over centuries to cast a long shadow on the true object of attention. That we can only read Macon through other characters deadens him and somewhat limits the reader’s ability to follow his motivations when he is alone. While this might be an effective filmmaking technique, to force characters together for the advancement of the plot, it makes for a boring storytelling technique, and perhaps led to the inclusion of BIll Pullman’s “Julian” character at all.

Macon’s final embrace of “wantonness and loose-living” sums this film up nicely. He realized, when he slowed down enough, that comfortable is just one of many emotions to feel. He became deliberate. The Accidental Tourist‘s resolution was poignant and whimsical, and helped to earn Geena Davis a Best Actress nod; it is now safely tucked away behind Rain Man for 1988’s Best Picture. The year was an obvious win for Rain Man, but not without a wide range of genre, including Working Girl, Dangerous Liaisons, and Mississippi Burning. The Accidental Tourist was perhaps the most abstract out of the five nominees in 1988, and with abstraction comes falling just short. The Accidental Tourist is in the rough, tucked away for whomever comes looking for it.