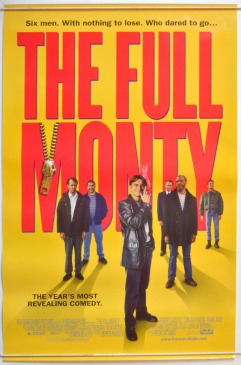 Lest you get the wrong idea, I’d like to start by saying comedy movies need not necessarily be artfully made. Stylistic filmmaking can distract from the tone a comedy screenplay requires. But I’d like a little creativity from time to time, and although The Full Monty has a number of amusing bits thanks to the winking performances from its actors, the camerawork was very still for a film revolving around choreography.

There are as many ways to make people laugh as there are methods of communication: body language, tone of voice, facial expression, music and sound effects; biting sarcasm, salty wit, acute satire; the unexpected and ironic, or obvious and deliberate; slapstick, vulgarities, and physical shtick… The list goes on and on, yet film is one of the few media capable of blending the desired selections from the full swath of tools to set a comedic tone. Not just The Full Monty, but seemingly the majority of comedy movies are afraid to move beyond over-the-shoulder shots and other static frames. TV shows and commercials nowadays have bolder filmmaking than studio productions. Before I get technical, let it be known that I’m writing this having recently watched this fantastic deconstruction of Edgar Wright’s comedic filmmaking style, which says everything I want to say more eloquently (and backs it up with clips).

If you don’t want to sit through all eight of its minutes, I’ll summarize the video: Edgar Wright makes inventive use of camera movement, framing, and sound editing to tell a story both comedically and cinematographically, in contrast to fellow Brit Peter Cattaneo’s The Full Monty. Granted, Cattaneo is going for a certain lighthearted realism and Wright is working within very heightened universes. But that doesn’t mean Cattaneo’s dance footage need be filmed in boring, unimaginative shots, particularly if the actors’ movements are supposed to be funny.  Perhaps jerky camera motions during the beginning of the choreography montage could give way to smoother, more flowy movements as the guys slowly learn how to strip in sync with one another. Or hopefully something better than that, I’m not a filmmaker. But the point remains.

In fairness, there were moments beyond the humorous dialogue and acting that left me grinning. Our protagonist spends much time spying on people over fences and through windows (something about envious, voyeuristic comparisons men make against each other and how that affects their perception of worthiness and manliness would be a whole other blog post), and some of those instances were well shot and edited. Particularly amusing and well framed were the guys spying on Tom Wilkinson’s character’s waltz lesson. And it goes without saying the final dance performance at the end of the film was a funny, suitable climax. Yet even the impromptu “Hot Stuff” dance waiting in line at the job centre, as funny as it was, could have been filmed with a little more panache.

It’s no wonder this movie was quickly adapted into a stage musical; much of it is simple, uncomplicated blocking with three walls surrounding the actors, who primarily dance shoulder-to-shoulder. There seems to be much more comedy available to be mined from this story, and you wouldn’t have to replace its reserved, dry Britishness with more American dick jokes, as a more up-to-date incarnation would no doubt attempt. Just a little more thought into making the presentation match the action and tone, and the movie would be elevated from an amusing diversion to an absurdist comedy.

Also, the entire time these grown adult men are stripping and practicing getting naked in front of one another and wearing banana hammocks, there’s a boy who appears about twelve years old forced to bear witness. From the inception of the production to the final performance, adults wag their penises at this child. And no one bats an eye. Just thought I’d make sure we all noticed that part, and didn’t gloss over it.

Speaking of batting an eye, The Full Monty is light on the male nudity (read: none) and the film is probably better for it. For if we were to experience half montys throughout, the climactic scene, tame by any standards would have fallen completely on its face – not that the gents would have felt any of it (if you catch my drift – tee hee!). But here’s the point: British culture is and has been almost completely lax about the blurred line between acceptable paedophilia, gay jokes, womanizing and a general lackadaze so prevalent in post-whatever medium-sized hamlet and unacceptable American puritanism. The Full Monty certainly benefits from this air lingering – it is certainly the most recognizable film in that not-so-specific category. It’s not quite as raunchy (no nudity), nor quite as “gay,” nor outwardly paedophilic, but implicit traces of each exist within The Full Monty, which suits the film and reflects British humor (also instantly recognizable) with the panache it seems to be missing.

But if the self-awareness allows The Full Monty to be tongue-in-cheek without forcing jokes on its audience, then the outcome is a minor letdown. The concept is inherently funny even to a non-British audience, so it’s a shame when it has to exploit some of the things about the lower middle class British life for a laugh, or overdoing the gay bits or really making the kid’s presence quite creepy. It’s not the subject matter that’s offensive because a. who cares and b. again, the concepts are inherently funny. The Fully Monty is a funny movie and it’s not artful but it doesn’t try to be. If a filmmaker or critic picks over a script enough it can tighten up loose ends or add a dash of subtlety to a non-subtle concept to add more thinking. He or she could also overthink the whole thing and then we get Black Swan. Or, he or she might underthink the whole thing and instead of The Full Monty we get Magic Mike. Take your pick – there’s a whole spectrum.

Titanic owned 1997 to an unfortunate extent (and I’ve seen all five of the nominated movies, so here we go). With a whopping 14 nominations and 11 wins, Titanic bored its audiences with a hyper-fictionalized account of the sinking of the unsinkable ship. Not known for its acting (0 wins of 2 nominations), Titanic benefitted from its huge budget and over-indulged production team; to award the Oscar was to validate the expense. Cameron tried this technique again a dozen years later to the tune of a Fern Gully remake, a huge budget, an even huger return on that budget and a half-shellac at the Awards (he lost two major awards to his ex-wife, Kathryn Bigelow, director of the excellent The Hurt Locker). Among the other films, As Good As It Gets is a Kierkegårdian float through the psyche of an outwardly misanthropic man and everyone else around him. It’s an excellent slice-of-life film with excellent acting (Jack Nicholson reprises his character [sort of] from One Flew Over The Cuckoo’s Nest and Helen Hunt is in her non-nude prime).

I’ve covered neo-noir masterpiece L.A. Confidential here, but the ensemble dynamics of the actors (and actresses) at the height of their prowess is astonishing. It’s also essential to compare L.A. Confidential with early film noir masterpieces like Double Indemnity or The Big Sleep to demonstrate technique upgrades or downgrades. The apples of the 1997 should have belonged to Good Will Hunting, which, besides harboring a stunning pun in the title, demonstrates the rise to prominence of Ben Affleck (minus Gigli, seriously) and Matt Damon – both of whom have written or starred in some of the most important films of the last twenty years, including Affleck’s Argo, which won Best Picture in 2011. Good Will Hunting crafts a more compelling slice-of-life drama, actually returned a higher ROI % than Titanic and the only gayness is implied through “male friendship and the case of the very very homophobic American people.” Good Will Hunting elicits nostalgia and compelling story-telling so that it’s not the phenotypic representation of the 90s, but the genotypic one. Seriously, see it if you haven’t.

View all posts by Adam Lauria